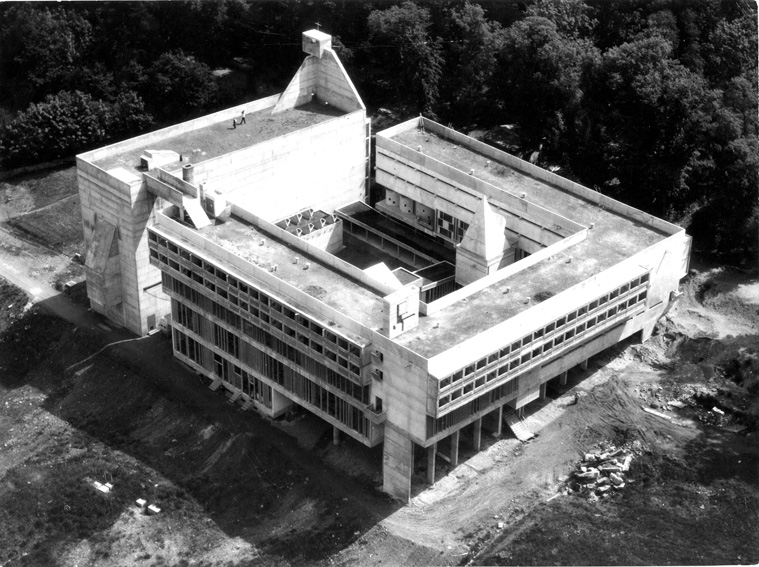 It is commonly said in IT, at least in Agile circles, that we can’t design software like we design building, using Waterfall approach.  Then we often said, including myself, that even if it works with the design of building, software really is a different beast.
But have we asked ourselves how well this waterfall approach actually works for physical building?

A few years ago, I moved to a little town near Lyon. During a walk, I accidentally discovered a very strange building. It basically looks like an enormous Soviet block, with no color and strange forms. I was really surprised because it was in a very nice place around, in the middle of a forest where you can do wonderful walk. There also was a very nice old fashion house in the neighborhood. And here stands this hideous block. My guess was that it was just something they inherit from the war, that the government gives away for charity (it is now a convent).
But when I was leaving the place, some signs for tourists explain to me that this is the famous “Couvent de la Tourette” design by the even more famous architect Le Corbusier. I hence accept that I just lack the sensibility to understand why this building is actually a piece of art, a masterpiece by a master architect, and not at all a Soviet block.
This was a few years ago, and I never think about it again, I may even have recommended this place to a few tourists in the region… “Do you know we have a famous building here?”

One of my favorite things is to try to understand how people considered as pioneers were influenced to think as they do and come up with mind-blowing ideas, especially in the IT industry. How Alan Kay has come to think about Oriented Object Programming (OOP)? How the manifesto signers were influenced to think about Agile?
And the one that leads me to this post: how the Gang Of Four has thought to design patterns? The short answer to this last question is: Christopher Alexander, another famous architect. In 1977 he co-authored “A Pattern Language” with Sara Ishikawa and Murray Silverstein. Of course the game does not stop here: how Alexander has come up to think about design patterns?
I still don’t have the answer here, but fortunately Alexander likes to write, and has published The nature of order where he basically explains why, how, and when he thinks in this way, and try to give a few answers about the universe as well…
Anyway, he criticizes lots of other architects in this book, including Le Corbusier, taking “Le Couvent de la Tourette” as an example of something very bad. He basically says that this block has nothing to do here, it doesn’t fit well in the place at all, it doesn’t care about the context. It was just an architect with probably lots of ego that draw it in his office, with his view of “modern” architecture, no matter if the place will be useful, or even beautiful. Funny enough, it perfectly fit what I thought when I saw this building for the first time, before knowing that a great architect has built it…

What’s a great building then?

According to Alexander, either something contributes to the whole, either it doesn’t. I can only give you a hint of what it means, because the 1200 pages of the book are basically here to explain this concept of wholeness in depth. In a nutshell, he argues that the error of the last century architecture is to separate the building from its context, sometimes by ego, sometimes by greed, sometimes by ignorance. Because of that some people believe they can just draw something, and the technical implementation is not their problem. They are missing (and usually don’t want) a feedback loop. They think that they are smart enough to design a perfect thing up front. Because in their beliefs, the context doesn’t really matter. They underestimate the difficulty, because they miss the fact that this building will be part of a more complex system, and cannot be great by itself because it will or will not improve the complex system in which it will take place.
Alexander thinks this kind of complex design can only be emergent and argues that this is how structure is built by the nature itself.

Feedback loop, contexts, emergent design… Are you talking about Agile or what?

Yes and no… Probably like you at the moment, I was thinking that I had found the source of inspiration for the Agile manifesto. And actually, it could be the case, because some of the manifesto signers were aware of the concept of design patterns, and thus somehow already influenced by Alexander. If by any chance a manifesto signer read this blog post, I would love to know if, at any point in the discussion, the name of Christopher Alexander was pronounced…
Anyway, Alexander is also aware that what he describes in depth is properties of complex systems, and that activities like crafting software can certainly use many of these ideas as well. But he’s also aware of Agile, and even talks about XP in his book! For him, it’s not enough. There are these notions of emergent design and feedback loop, but he thinks we are still missing this concept of “wholeness”. And at this point, I agree with him.

Dude, would you mind talking about software now?

Here we go, Like Alexander, I do believe that his ideas applies very well in software as well, as in any complex systems.
Indeed, we can feel that some programs are “bad” somehow.  The tricky thing is that we don’t have an objective way to judge it. We are missing this wholeness property. Some software is good, despite their lack of unit tests. Some software is good despite a shitty User Interface (UI). Some software is bad, despite the unit tests, the agile mindset, the pretty UI and the use of the last fancy framework or architecture style (yes Microservices, I see you!)
This is because, in a complex system, what we feel as good or bad is the sum of many properties interlaced, that we can’t control or even enumerate. We can only feel them. Worse: these properties are different for each software, because they are highly dependent on the context.
The same is true for physical building, still Alexander has tried to find high-level properties that usually fit what he considers as great structure.
Then defining good software with practices or tool is definitely a failure. Your system won’t be great just because you’re building an event sourced system with a shiny framework in a functional language.
It won’t be great just because you’re OOP code base is SOLID.
It will be great only if both people building it and people using it are happy. Only if they feel whole when they use or build it. These kinds of software probably have high level common properties that we should strive to find.

What’s on your mind about it? Can you think of any useful properties of such systems already?

2 thoughts on “The properties of great architecture”