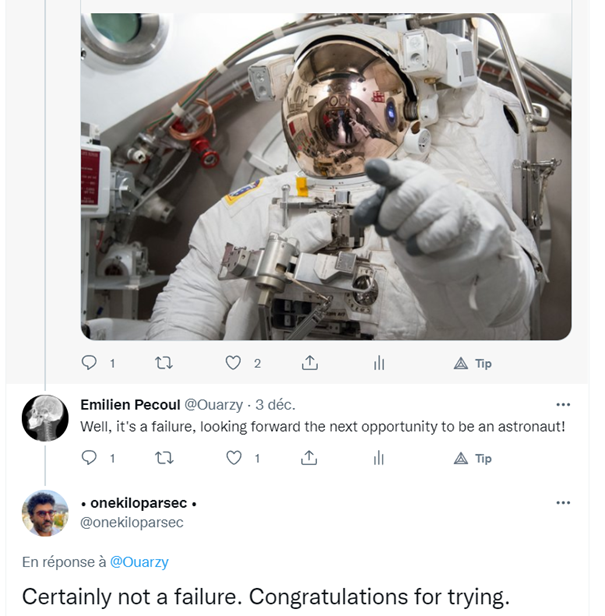 Guess what I received a few weeks ago in my inmail?

And you know what is cool about failing at almost impossible task? You learn a lot, and you’re not even disappointed about the result 😊

I won’t be an Astronaut

And that’s not the kind of phrase that makes you sad, because you actually never had any hope about it, before they opened the selection. And because they insist on being very inclusive and challenge people to try even if they don’t think they can, I tried. And I’m really thankful because despite the odds, despite the fact that I have almost no required traits to be an astronaut, I still had this “what if” moment where I was actually thinking about what my life would be if by any miracle I went through the process. So what have I learned as an ASCAN? (At least I learned that the term ASCAN stands for Astronaut Candidate, hence I can call myself an (ex)ASCAN !). Lots of things, but here are the most interesting and/or fun one imho.

I learned some basics of orbital mechanics (thanks Romain Berthon and KSP – Kerbal Space Program). The funniest part is that you need to slow down to go on a lower orbit when you need to go faster, because if you just go faster you will end up in higher orbit hence, your speed will decrease.
If you don’t understand the previous sentence, just play KSP and it will make sense. But you can guess that organizing a rendez-vous between let’s say, the International Space Station (ISS) and a spaceship is not a trivial thing.

Wearing diaper is not fun

I remember thinking the first time I saw the image of an astronaut outside of the ISS “wow, I hope he won’t need to go to the toilet”. But now I know that he won’t need, and why, and that’s not the thing you’d like to talk about when you come back to earth.
To make the situation worse, they need to put you in a pressurized suit to survive outside a spacecraft in space. But the pressure is a bit less than what you’re used to, otherwise you’re not able to move your arms, legs and fingers (something Alexei Leonov, a Soviet cosmonaut, learned the hard way as the first person who did an EVA – Extra Vehicular Activity). And you know that gas is going from high-pressure environment (like your body) to less pressure environment (like your suit if you have the incredible chance to be an astronaut doing an EVA). As a result, you’re farting for hours, but with an incredible view.

The space shuttle was a pre-SpaceX era

Sounds obvious, but what I mean is that they invest in the shuttle because they firmly believe that reuse will be the future of space travel. They stopped it after 2 tragic accidents, but mainly because it wasn’t affordable due to the launcher that wasn’t fully reusable.
That’s why the Russian rules for decades thanks to the Soyouz. Not reusable, but cheap and reliable was the best that we can do for a long time. Now Elon Musk is challenging this status quo, and it’s absolutely impressive to see how.
Basically, the NASA and ROSCOSMOS (Russian federal space agency) are the old dinosaurs using huge waterfall program to deliver reliable vehicles in decades. SpaceX is the agile start-up breaking prototypes faster than the NASA can deliver specs on Microsoft Word. And by breaking things, they mean it, because a failing space rocket is usually nothing but a big explosion. That’s why they learn so fast, and that’s why they’re now able to replace the Soyouz to send people to the ISS. And that’s also why they have a credible plan to send people to Mars.
We can note that the CNSA, China National Space Agency, also goes very fast, and is also autonomous in terms of space shuttle. Europe is far behind.

On the way to mars

We currently face 2 main issues to go to mars.
The first one is that we have no idea about what staying 6 months without an atmosphere to protect you can do to your body. And if you believe like me that we should be able to learn that on the ISS, you’ll be wrong because even ISS is under some earth protection. That’s why they’re thinking about generating a magnetic field around spacecraft to go to mars. Add an ion engine to that, and you’re pretty much into a good space opera movie. But this is for real.
The second issue is that landing a rocket of several tons on mars is currently impossible. Because mars has a really thin atmosphere, you need to slow down a lot if you don’t want to crash on the ground. And you can’t use parachutes like on earth. Hence you need a lot of energy (i.e. fuel) to slow down and land on mars. And the more fuel you want to carry there, the more fuel you’ll need to launch from earth. And with our current knowledge, we just can’t build a rocket able to carry enough fuel for that. That’s why spaceX is thinking about refueling a spacecraft directly in the outer space…How cool is that?
We’re not even talking about coming back so far, the most plausible way to do that is to create the fuel directly on mars using in situ resources. First people on Mars will have lots of fun.

Next step is the Moon

The Gateway will be an outpost orbiting the Moon that provides vital support for a long-term human return to the lunar surface, as well as a staging point for deep space exploration. Basically, imagine the ISS, but around the moon. It’s part of a bigger project called Artemis, aiming to explore and learn more about the moon. Even if the NASA leads it, other countries will be able to participate in this, a bit like the ISS. China already has its own plan to go autonomously to the moon.

Being an astronaut is mostly training, waiting and doing experiments for other people

You need 5 years in average to prepare a space mission. During this time, you learn almost everything you can about where you will go (currently the ISS) from what to do in case of fire to what to do in case of breaking toilets. Not forgetting what to do if someone dies during a mission.
The fun thing with the ISS is that it was built by several countries, and you actually visit the different countries (Europe, US, Russia, Canada, Japan…) to learn how to operate the different part of the ship. You also need to talk perfectly English and Russian (learning Russian is part of the training for ESA astronaut).
You also learn all the scientific experiments you’ll do when you’re in space. Like growing tomatoes or learning about fluid mechanics in space.

What if we colonize the outer space?

I’m always amazed by the notion of time, the relativity of it and its very nature. I read a few weeks ago the excellent “the order of time” by Carlo Rovelli. To be concise his intuition is that time is a creation from our soul to make sense of the world. There is nothing like “the” time. There is one for each of us. At the scale of earth, it’s not a problem and we don’t even feel it, even if we can measure it with really precise clock (yes your head gets older faster than your feet). At the scale of our solar system, it will still be manageable. But as soon as you imagine going to other systems… Even if it’s Alpha Centauri, the closest one at 4.35 light-years, you will have headaches if you try to imagine what would be life for two civilizations in these two systems trying to collaborate.

I won’t be an astronaut

But the opportunity to pretend that I could be was really fun, full of learning…And unexpected!